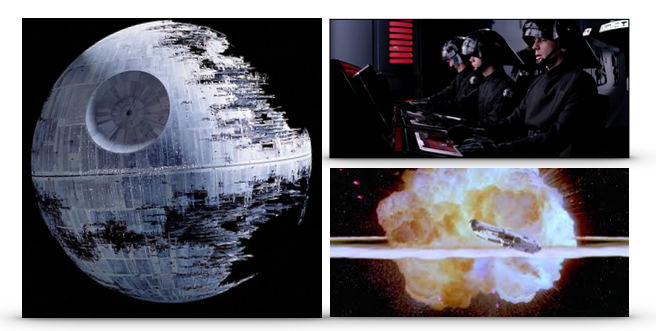 Why your continuous integration server could be a Death Star

The Death Star is a fictional spacecraft and superweapon designed to intimidate and be used asymmetrically against opponents that cannot repel firepower of that magnitude.

It is also a single point of failure that ravenously consumes resources.

Sounds familiar? Your Continuous Integration Server may actually operate like a Death Star.

Many developers and technologists think they would identify as members of the plucky Rebel Alliance, instead they behave more like the Imperial technicians, pictured above, sitting at their consoles in front of blinking lights.

Build shaming is not acceptable as way of handling build failure by calling out, paying fines etc such that it creates a cycle of blame culture.

If the success of your engineering project revolves around the use of group think to make team members do the right thing to fix the build, then they clearly don’t have the latitude to make improvements by themselves.

When a Death Star can be defeated by the introduction of a small defect like a failing test - then it is simply too big.

The solution isn’t to try and keep your Death Star fully operational and on schedule by threatening a visit from a Sith Lord.

The purpose of a CI system is to prevent unknown problems making it into production - rebellious developers will just find ways of keeping the appearance of the build green.