97 Things Every Java Programmer Should Know 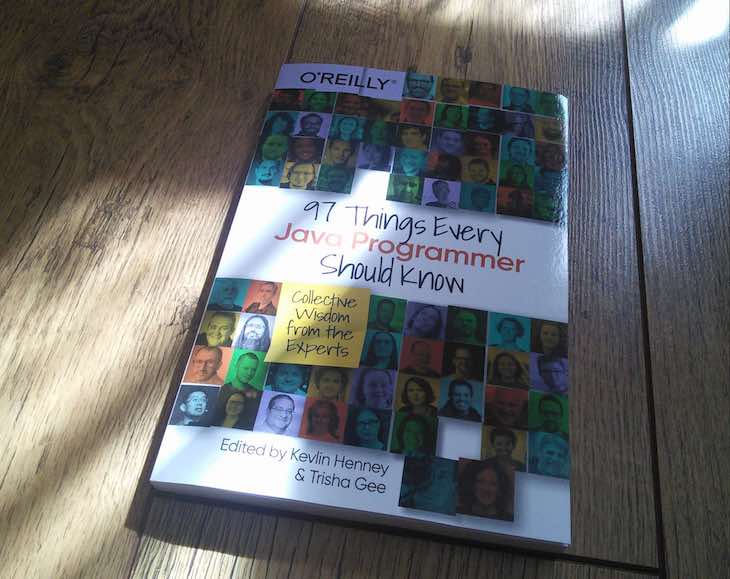 This is a reference to the first printed edition from June 2020.

This book has around 250 pages including the index.

It is a collection of short blog posts, each 2 to 3 pages at most, that are curated together as this pulp book.

Intentionally, the only structure and organisation has the contributions ordered alphabetically.

Like Java, this book is reminds of another 90’s throwback WebRings “A web ring is a collection of websites linked together in a circular structure, and usually organized around a specific theme, often educational or social. They were popular in the 1990s and early 2000s, particularly among amateur websites.”

Released around Java’s 25th Birthday it provides insights and general thoughts highlighting where Java has become ubiquitous for Today’s programmer.

This book could be useful for People who are new to a Java/JVM World arriving from an Open Source background, and less so for people already leaning on the JVM as their daily drive for many years.

One can imagine the Programmer–archaeologist, Vernor Vinge’s far future engineer, would make use of Java one day and wonder how it came to under-pin so much technology.

The book has no agenda or one true answer to the narrative so that some pieces have the contrarian view: “Why I Don’t Hold Any Value in Certifications” versus “Java Certifications: Touchstone in Technology”.

The bulwark of Java programmers, on the Android platform, that makes extensive use of the Java APIs, is not covered in the book. Crashes are quite frequent on these platforms.

Touching every Java programmer are Exceptions, there are several pieces in the book covering this archetype of Java.

Unlike native programming languages requiring manual memory management, segmentation faults get paid for immediately with a crash, the Java NullPointer Exception becomes the “billion-dollar IOU” even though in a language that doesn’t have “pointers”.

Around the turn of the millennium, the Java2 Enterprise Edition existed, aimed at serious business applications turning UML into code.

Java long ago moved beyond being tied to Sun Microsystems profitability and it’s J2EE mono-culture, to being embraced by an Open Source steward-ship of collective wisdom to keep it going.

As Apple move to their new Silicon, We will see if the JVM continues with the promise “Write Once Run Everywhere”.