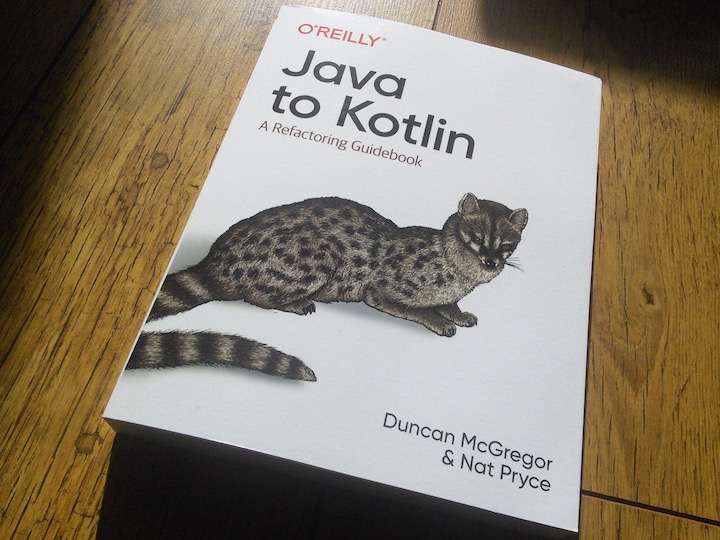 The printed book also contains a bibliography and index pages

Subtitled with “A Refactoring Guidebook”

There are twenty-three chapters that take a refactoring, starting mostly in the Java idiom, from one concept “to” another concept

Not surprisingly, there is a lot of code in the book and is rendered quite small as the examples are nearly production ready - consideration should be made if you would prefer to get the digital version only to follow along better. A supplemental web site is java-to-kotlin.dev

Though this is not a Kotlin learning book aimed at beginners - it avoids knowing about Coroutines, libraries and frameworks that are evolving

For the legions of Android developers - it is not about Android either, however Mobile developers on IOS (Swift) and Android (Java) can benefit

Kotlin has enough “taste” that it appeals to the Pythonista and possibly has encouraged, in a long time, new developers onto the JVM

The Java language is enough to repel new adoption even with additional features, with the initial inertia of deployment in Enterprise, 15-20 years ago, to carry it along

When Java began to rely on annotation processors to become tolerable (e.g. Lombok, AutoValue etc), the benefits in taking immutable values and transforming with functions has to be built into the compiler, then a new language is required

This chapter, for example, takes a detailed refactoring for handling failure in a program and provides great insights

As Kotlin doesn’t support checked exceptions, error detection by the caller using some kind of value based idiom is preferred

In Kotlin - the null type is still a valid return value to communicate to the caller, often better than fire-bucket exception throwing, however there is no way to provide any error information. Error checking in local functions that provide data to the rest of the program is still required and throwing Exceptions should be performed at the perimeters of the program - see Danny Thorpe’s excellent Delphi Component Design - Rules of thumb for implementing exception handlers

Kotlin has introduced a Result that represents success or failure as an inlined value instead of an Either e.g Result<Data, Error> with two sealed values

Kotlin the language still has places to go where cherry picking some language transformation features are useful, for example Scala 3 union types are the most concise representation such that it becomes Data | Error without the clunky enclosing Either type and is a great improvement

This book is valuable to the reader, going above and beyond syntax changes, by showing some 5 years of Kotlin design experience from the authors and their skills in testing and refactoring towards functional thinking

The key teaching from this book is the ability to transform a system, while keeping it building and working, is the most valuable refactoring