Although Kotlin has been around for a number of years, the last 2 years really kicked off a surge getting Kotlin to 1.0 and beyond.

With impetus from Swift on IOS, it enabled Kotlin to be promoted as a slick and concise replacement for Java on Android.

So then, announced at Google I/O, Kotlin is now an official 1st class language on Android and offers developers a parity with Swift on IOS. Getting started with Kotlin

Google are supporting and partnering a Kotlin non-profit foundation.

Finally, at Google I/O:57mins, we see a short demo where a single data class can replace over 80 lines of Java. Then, to gain familiarity, copy Java code and paste into your Kotlin project to perform inline conversion. 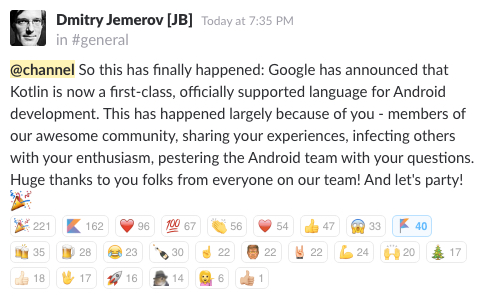